Many businesses had to adapt to the changes resulting from the ongoing pandemic situation. New challenges forced some of them to shift their efforts and reorganize their work structure, oftentimes by turning their brick and mortar shops into mail-order sales or running an online store, even if they had never considered it before.

Those who had already been active on the web did not have to resort to such drastic changes. In fact, there are companies that turned this difficult time into a successful one, either by taking advantage of tried and tested solutions or by updating their offer and doing an overhaul of their workload to fit the current climate better.

KAMAN Social Media is a small digital agency that offers social media marketing services for clients in Poland, the UK, and Germany. The shifting landscape in e-commerce meant that the company needed to create landing pages for its customers quickly and easily.

At first, Tomasz Więch – the CEO of KAMAN – delegated the process to freelancers and subcontractors. He was worried that the use of a landing page builder might be too difficult to handle effectively in terms of implementation. It soon turned out that it was much easier than he had thought.

Despite the fact that KAMAN’s landing pages used to be created by a designer, the look of the pages had never been considered more important than other elements. Tomek Więch is a believer in the “good enough is good enough” approach.

Having said that, the KAMAN agency does pay attention to design for practical reasons:

A well-organized and good-looking landing page makes it easier to present the values or benefits of a given product or service. Not to mention that with the right structure, it allows highlighting certain elements.

To prove my point, here is a landing page made by KAMAN in the Landingi editor:

...and the end result is satisfactory in terms of visuals. These three elements were exactly what the KAMAN agency had been searching for, and Landingi provided the solution.

The creation of a landing page in our editor does not involve any coding or design skills – most of the work is done by one of over 300 landing page templates.

All you have to do is find a template you like and drag & drop necessary changes to make it fit your needs. Then, just write the copy, replace the visuals, and add a video. Once you do that, you are ready to check whether the mobile version works equally well.

The template is a good starting point that serves as a canvas for your final product. The possible improvements are up to you. Changing the colors, adding better images, or even making more invasive changes to the structure of the landing page – all of that is doable in the editor.

The main benefit is, you get a good-looking design from the get-go. The time it takes to make it yours and start getting leads is short.

The other aspect of the business activity of the KAMAN agency, which is run by Tomek and his wife, is the organization of training courses. KAMAN has created a landing page to promote their offer and sell courses.

The straightforward design helps the viewers focus on the goal of the landing page – getting access to the online course. A single CTA, short and concise copy eliminate the number of distractions, which is a solid tactic in terms of conversion. Other notable elements include the benefits section:

What we learned from working together

Landing page at the start

While the Glass Milk landing page got 75 leads, that’s not what its main result was. A large portion of the visitors – the group included farm owners – was interested in cooperation with the agency. Another group inquired about the treatment of the animals and suggested not using milk at all.

As such, the feedback received during the campaign has become incredibly valuable, as it allowed the agency to measure the public mood regarding the subject as well as the demand. Furthermore, it’s a case where a landing page can potentially save a lot of money.

This example shows that a landing page doesn’t have to just generate leads or sales, but it can also help assess the MVP or verify business ideas outside of the marketing department. Getting the idea out there in the early stages can help optimize future plans and spending.

The other landing page we’ve presented in the post was part of the online course sales campaign. One of the tricks up its sleeve was the ability to complete the payment directly on the page thanks to integration with tPay – one of the most popular online payment platforms in Poland. The whole transaction took place without a single redirection, which is a great solution from the UX perspective.

Sylwester Karnuszewicz
Content Team Leader @Landingi
Knight of pen and paper (more like keyboard and mouse), trying to put a board game or video game reference anywhere he could. 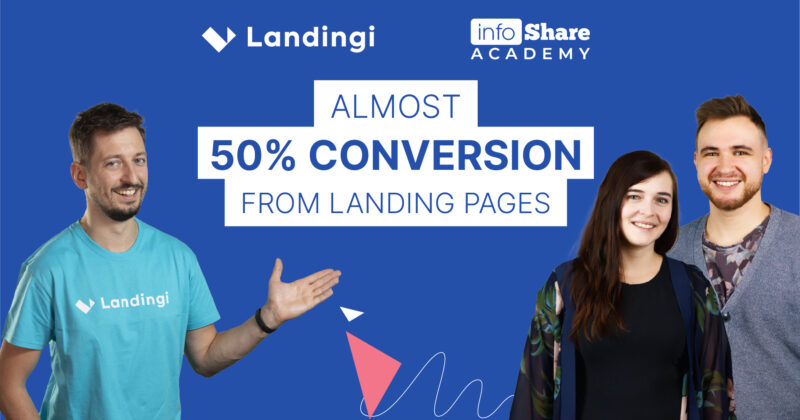